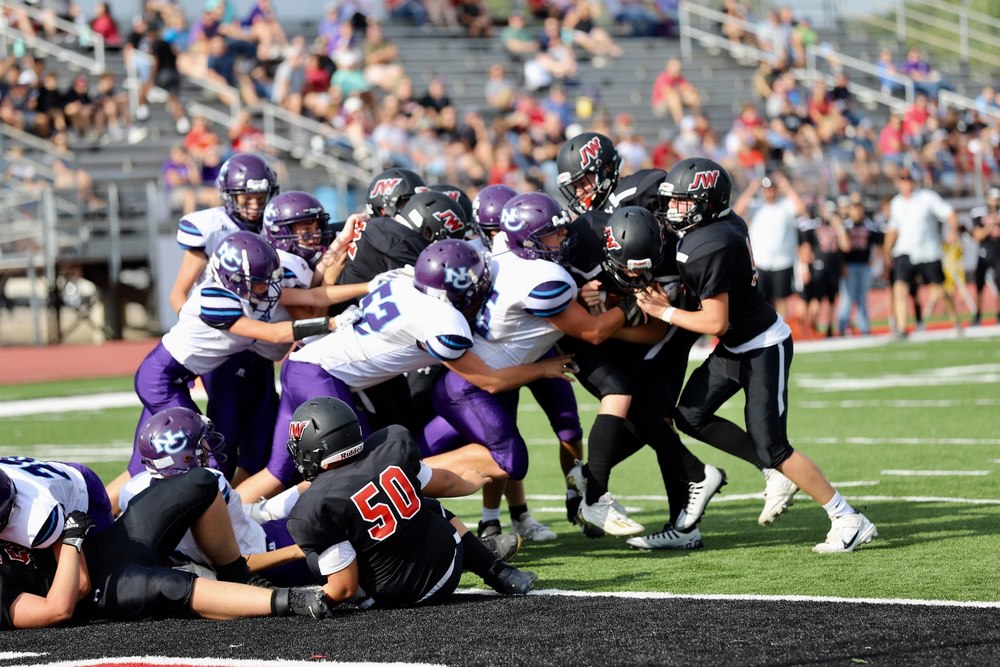 NCMS Thunder has a Tough Loss to Jeff West

The Nemaha Central Middle School football team traveled Southeast to Meriden to play the Jeff West Tigers on Thursday, September 15. The Thunder, with a 2-0 start to the season, was looking to make it 3-0 against the Tigers.

The second quarter of play started and NC had the ball.  The team had a bad drive and turned the ball over on downs. Following the turnover, the Tigers proceeded to have a really good drive, followed by a touchdown. Again, they were stopped on their two-point conversion attempt to make the score 0-12. In the next series of plays, the Thunder had a really long run but was tackled right before the goal line. They followed up the long run with a touchdown to make the score 6-12. They too were also stopped on their two-point conversion attempt.

To start the fourth quarter of play, the Thunder looked to score. However, the NC boys fumbled and turned the ball over. The Thunder's defense stood strong forcing the Tigers to turn the ball over on downs. The Thunder took the ball back, however they fumbled again turning the ball back over to the Tigers. Jeff West starting at the 20-yard line ran the ball in for another 6 making the score 6-24. They were stopped again at the goal line by the Thunder. The Tigers kicked off to the Thunder and the Thunder had a big 70-yard kick return to score their second touchdown of the game. NC was going for the 2-point conversion and made it successfully making the score 14-24.

Even though the Thunder lost, they felt like they didn’t play their best game. The Thunder team had a lot of turnovers that possibly changed the game. The Thunder’s record went to 2-1 and they are looking to get back on the winning streak again next week.

“It’s not whether you win or lose, it’s how you played the game that counts,” said Conner Lueger.

“We played a great game, if we stopped them just one time we would have had the game in the bag,” said Carter Stallbaumer.