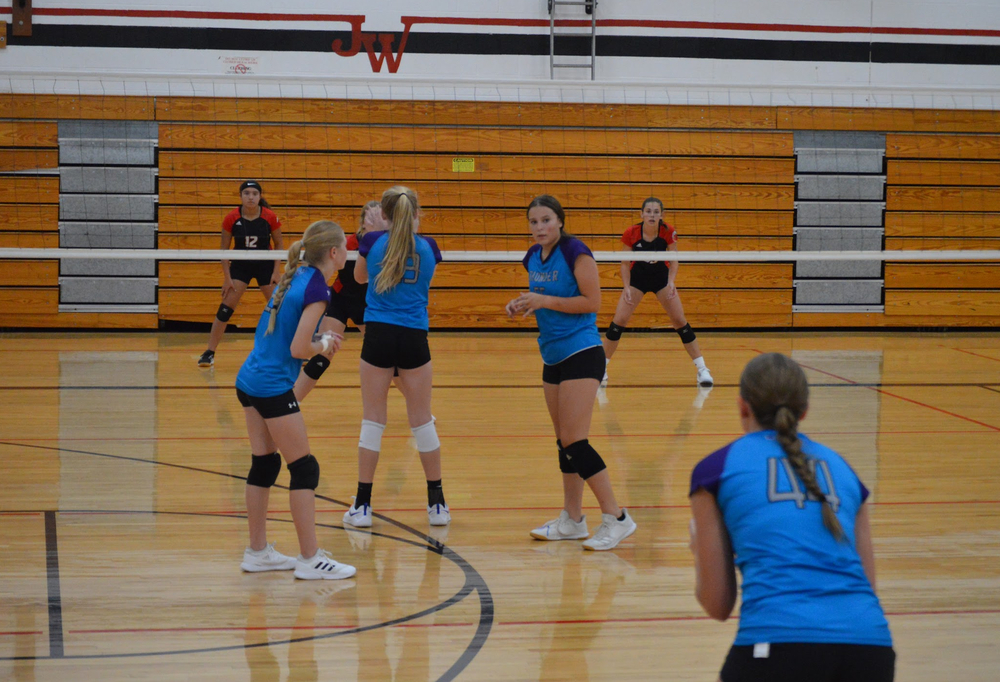 The Nemaha Central Middle School volleyball girls hit the road and traveled to Jeff West on Thursday, September 15. The NCMS girls have been doing really good this year and have had few losses on the season. The teams were looking for some good competition against Jeff West.

The eighth grade A-team came into the first set ready to win the match. The girls started off with a small lead, but Jeff West took over and ended up winning the set 18-25. The girls lost some momentum and stopped talking which caused them to drop the second set, 18-25. In the third set, the girls came out louder, stronger, and had a bigger desire to win the game. The girls ended up coming out on top in this set 15-12.

The eighth grade B-team started off their match playing aggressively. They fought a close battle with the Tigers in the first set and were victorious with a score of 25-23. The energy of the first set carried into the second set and the Thunder captured the set win, 25-21.  In the third set, the girls worked really hard to win but weren't able to come out on top losing a close one, 14-16.

Ella Huerter said, “We didn’t play the exact way we wanted to, but we tried our hardest.”

The seventh grade A-team were ready for some volleyball to keep their undefeated record alive. They had several good hits and serves throughout the match. In the first set, the Thunder team was challenged but won with a score of 25-22. The girls worked hard in the second set and it paid off as they won, 25-17. The Thunder luck carried on to the third set of the game and they squeaked past the Tigers, 17-15.

Kinsey Monier said, “I was kind of nervous for the Jeff West game because I wanted to make sure we kept our winning streak. We did really well and had some good volleys. I’m happy to say we won!”

The seventh grade B-team girls started the game off with a boom. In the first set, the girls had several good passes which helped lead them to the win, 25-20.  Their confidence carried over into the second set as they dominated with a 25-9 win.  The third set was a constant battle and the Thunder fell just short, 15-17.  However, they won the match over the Tigers.

Overall the volleyball girls are really starting to click and hope to dominate some teams in the remainder of the season.