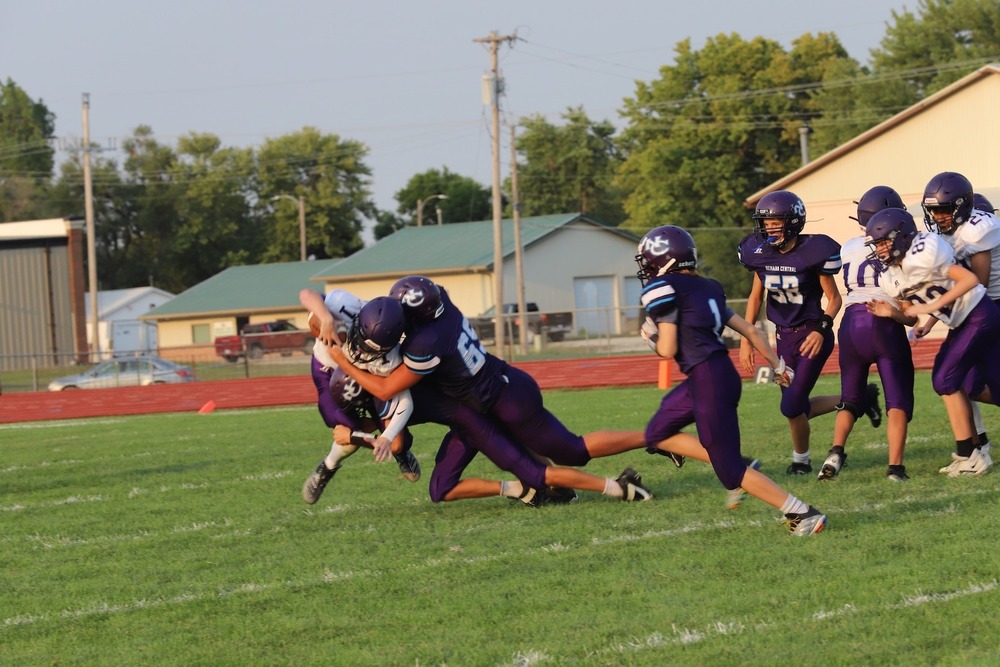 NCMS Football Racks up Another Win

The Nemaha Central Middle School football team played their first home game against Royal Valley on Thursday, September 8. The NC boys came off a big blowout win against Perry-Lecompton in their first game of the season. The NC boys hope to go undefeated for the season.

The whistle blew and the game began with NC winning the coin toss and choosing to kick off. The first quarter was off to a slow start until the NC defense held the Royal Valley Panthers on their own 45-yard line not allowing them to move forward to the end zone. This would be the momentum that the Thunder needed to move the ball, but the Panthers' defense came to play. The first quarter came to an end with a score of 0-0.

The second quarter started off with NC having the ball on their own18 yard line. It took the Thunder two plays to make the first touchdown of the game. The Thunder kick-off to RV, they get the ball on their own 30-yard line only gaining 5 yards. A couple of plays happen with a few yards allowed until Royal Valley finds a gap and runs it to the 23-yard line. The Panthers would go down the field with 6 plays to tie the game, 6-6. The Panthers kick off and NC took over at their own 35-yard line to have a penalty which in the next play turned into a running touchdown and a 2-point conversion. The score was 14-6 at the end of the first half.

After halftime, the Thunder came out strong in the second half by receiving the ball at the 34-yard line. The next play would result in an NC touchdown and a 2-point conversion, making the score 22-6. The Panthers get the ball back and only make 3 plays before being forced to punt the ball to the Thunder. This would set the ball up on the 43-yard line of NC. After penalties on both teams, the result would end up being an NC touchdown with a run play and a 2-point conversion making the score 30-6. The Royal Valley Panthers had a difficult time making anything happen in the third quarter.

Mason Schultejans said, “We had a slow start in the first half but in the third quarter we got on a roll and started to score points.”

In the final 8:00 minutes of play, the Thunder would start off on defense. They only allowed the Panthers to sneak through for a running touchdown and also a 2-point conversion making the score 30-14. The Thunder team got the ball back and had a bad snap pushing them

back from the 38 to the 26-yard line. The result ended with a punt back to the Panthers and the ball on the NC 41-yard line. Royal Valley would try their luck on 4th down which resulted in the ball going back to the Thunder. The ball was placed at the 46-yard line of NC with only seconds left in the game. The Thunder would pull out the victory with a score of 30-14. This would keep the Thunder football team undefeated!

Dason Hill said, “It was a hard-fought game on both ends, but Nemaha Central came out on top with the victory.”