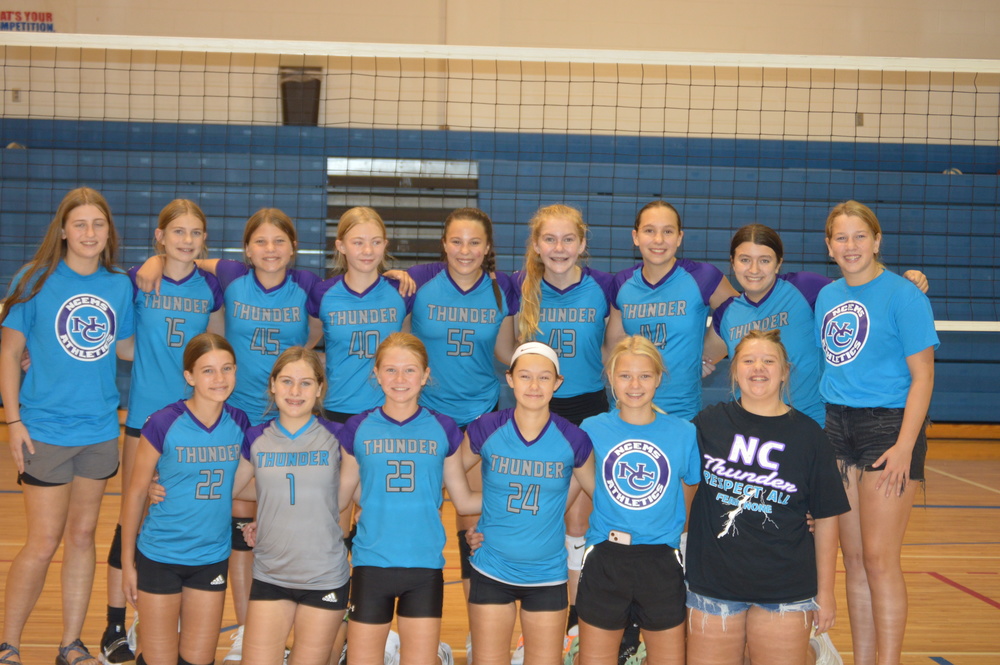 The Nemaha Central Middle School Thunder Volleyball team headed to Axtell on Saturday, September 10. The team listened to Taylor Swift on the drive there to get them pumped up for the tournament. The girls started their day off ready to defeat their opponents. Their pool consisted of teams from Doniphan West, Valley Heights, and Wetmore.

The first match of pool play was with Valley Heights. It was a tough team and the girls put in a hard fight but the first set ended in a loss, 25-23. The girls put in their best effort in the second set but fell short in the close battle, 28-26.

The Thunder’s second competition in the pool was against Wetmore. The NC girls destroyed Wetmore 25-10 in the first set. Then they dominated the Cardinals 25-7 in the second set. They were pumped after that awesome match!

Before the third match of pool play, the girls were jamming out to music. In the match with Doniphan West, the Thunder team destroyed the Mustangs with their serves. The first set ending score was 25-10. The second set was 25-17. The Thunder team was so excited that they beat the Mustangs.

Makenzie Howard said, “We were excited to finish second in our pool to still have a chance at winning the tournament.”

The Thunder girls finished second in their pool and advanced to the semi-finals against Linn, who finished first in their pool. This match would decide who would advance into the championship match. The girls fought really hard and came out on top with a score of  25-16. The second set wasn’t as close, but it was a good game. The Thunder came up short losing  21-25. The third and deciding set went in favor of the Thunder as they communicated well on the court to get the victory 15-7.  The Thunder girls were thrilled to head to the championship match to face Valley Heights again.

The championship match was really exciting. The girls didn’t play the exact way they wanted to, but they put up a great fight. The Thunder team came out of the first set with a loss against Valley Heights with a score of 22-25. In the second set, the girls lost their momentum and fell short, 20-25. The Thunder girls ended up in the tournament with a second place finish.

Austin Jones said, “It was a very long day and we worked very hard to beat the teams. We tried our best but came out with second place.”