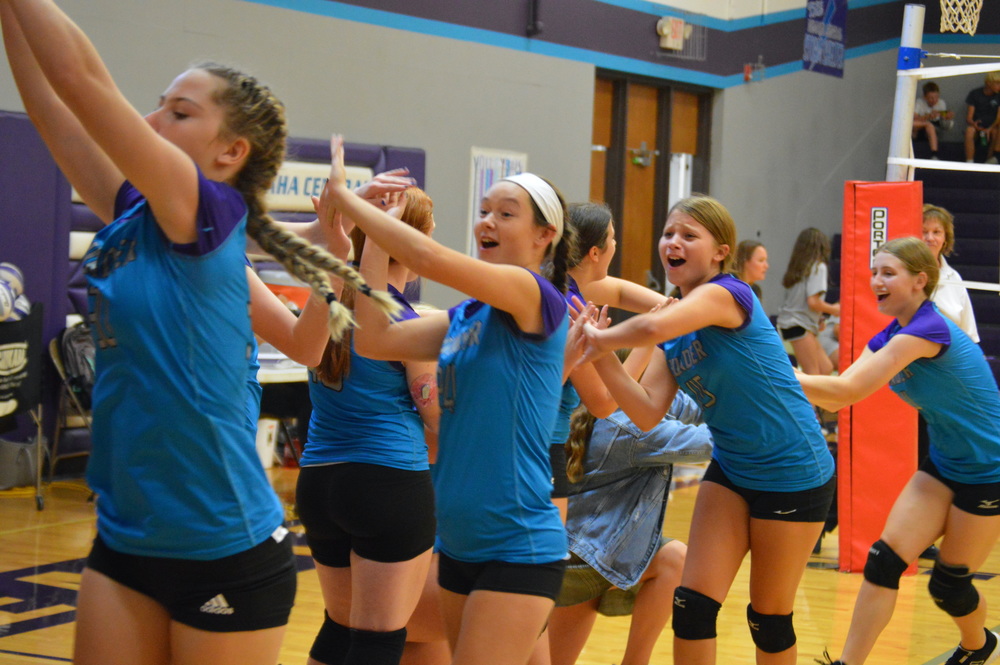 The Nemaha Central Middle School volleyball team battled the Riverside Cyclones and the Sts. Peter and Paul Trojans on Monday, September 12. The Thunder had a long night ahead of them but came pumped and ready to play.

The NC eighth grade A-team came ready to play the Cyclones and won the first set 25-17. The girls kept up the momentum and won the second set 25-13. In the third set, the Thunder played in a nail-biter but battled and ended with a win, 16-14.

The eighth grade B-team was up next, and they also battled RIverside and put themselves on top winning the first set 25-17.  They continued to put up a fight and won the second set 25-14. The Thunder topped off the match with a win in the third set 15-5.

“We played hard and came out on top,” stated Alexis Spring.

Playing in the secondary gym, the seventh grade A-team started playing the Cyclones. The Thunder team came ready to play and won the first set 25-17. In the second set, the team had a close battle and played tough to win 26-24. The girls kept the momentum and came out on top in the third set winning 15-11 to claim another season win.

Next up, the seventh grade B-team also battled the Cyclones and played a challenging set and won 25-18. Winning the first set helped the girls continue to stay on top and win the second set with a score of 25-6. In the third set, the Thunder fought their hardest but ended up losing 9-15. Although the Thunder team lost the last set, they won the first two and walked away with a win under their belts.

Ali Henry said, “Even though we won, I think everyone on the team knew that this wasn’t our best game. Overall it was good.”

The eighth grade B-team battled the Trojans looking for another victory for the night. The first set was back and forth, but the team struggled to keep up losing with a close score of 20-25. In the second set, the Thunder didn’t play their best and lost the set 8-25, which caused the team to give this match to the Trojans.

The seventh grade A-team challenged the Trojans and started off rough losing the first set 14-25. In the second set, things turned around for the team, and they won with a score of 25-15. The third set was very challenging, but the girls fought their hardest and walked away winning 15-13.

“I really enjoyed playing SPPS because I’m good friends with some of the girls from there which made me want to beat them even more,” said Kennedy McKee.

Next was the seventh grade B-team and they also played the Trojans. In the first set, the team started strong and won 25-21. The second set didn’t go as planned and the Thunder lost with a score of 17-25. In the third set, the girls played their hardest but unfortunately didn’t come out on top and lost the set 11-15.

Lena Hynek said, “It was a very intense game because we are both very good teams.”

The Thunder played some close intense matches and walked away with six out of eight match wins. The girls hope to continue to improve for future matches to come.