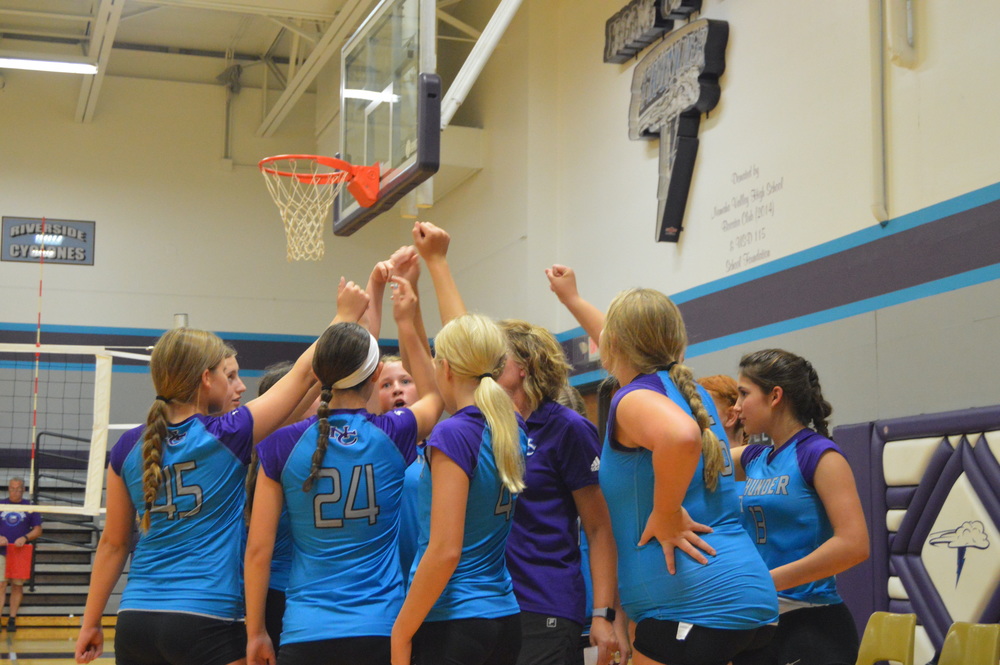 NCMS Volleyball Kicks Off the Season

The Nemaha Central Thunder volleyball season is officially here. The girls played Silver Lake at NC on Monday, August 29. The team consists of 18 eighth graders and 28 seventh graders. The manager of the Thunder team is Teagan Lueger and the coaches are Nikki Honeyman, Carly Hill, and Lisa Holthaus.

The eighth grade A-team was on the court first. Playing the tough Silver Lake team, the girls battled back and forth falling just short in the first set with a score of 24-26. In the second set, the girls played hard but didn’t end up on top losing 21-25.

Alex Burkitt said, “I thought we played really hard and gave it our best. I’m really looking forward to a great season this year!”

Next up, the eighth-grade B-team started out with some great serves, helping them win the first set 25-10. The second set didn’t go as planned with the team losing 20-25. However, in the third set things turned around for the girls and they ended up winning 17-15 in a nail-biter set.

On the other court, the seventh grade A-team played a fantastic first set winning 25-15. They kept the momentum up in the second set, winning with a score of 25-18. In the third set, the girls tried their best but ended up losing by a score of 10-15, but they still walked away with a win.

“I was kind of nervous for my first middle school game, but as the match went on I got more confident and our team played really well together,” said Meg Honeyman.

Next up, was the seventh-grade B-team. The girls started out on top in the first set winning 25-14. The girls kept up the great work winning the second set with a score of 25-11. In the third set, the Thunder fought their hardest and it paid off with a slight win 16-14.

The teams had a fantastic start to the season with three out of the four teams walking away with a win. Good luck to the Thunder team for a great rest of the season.