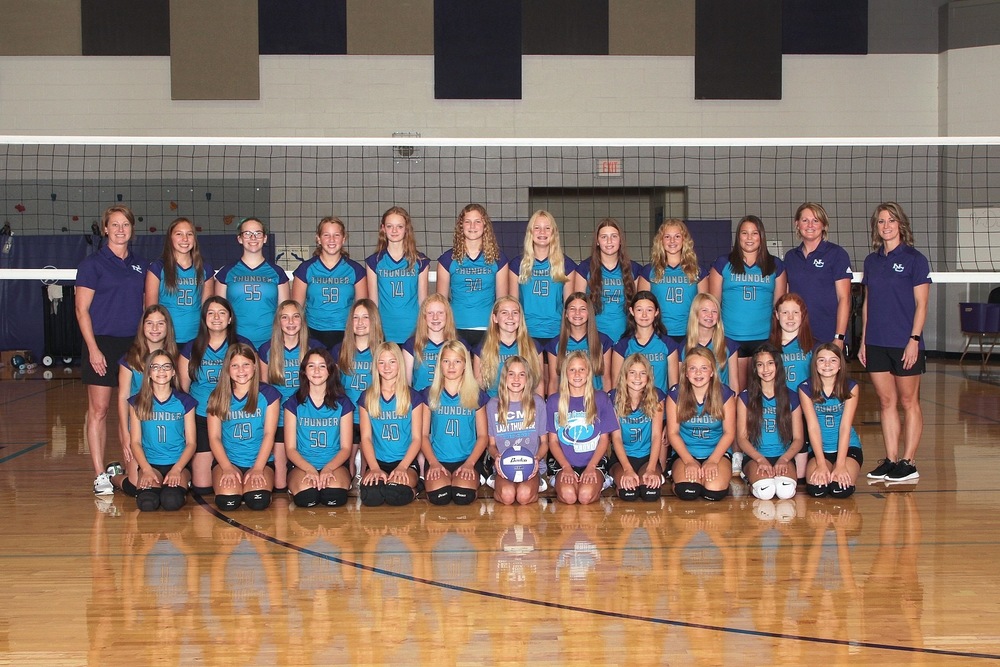 NCMS Volleyball Starts the Season off at Silver Lake

The Nemaha Central Middle School volleyball team kicked off their season by traveling to Silver Lake on Monday, August 30. The NC volleyball team consists of 19 seventh-graders and 10 eighth-graders. The managers for the season are Meg Honeyman and Macy Holthaus, and the coaches are Nikki Honeyman, Carly Hill, and Lisa Holthaus. The volleyball team was overjoyed to be back on the court.

The NC eighth grade B-team took the court winning in the first set with a score of 25-22. In the second set, things didn't go as well as they dropped the set 18-25. In the final set, the Thunder team fought hard but finished with a loss of 10-15.

The NC eighth grade A-team stepped on the court hoping to get their first win of the season. The first set was very exciting as both teams battled for the victory. Unfortunately, the Thunder team came up short losing 27-29. The Thunder team had a hard time recovering from the first set loss and dropped the second set 14-25. Although they lost the match, the volleyball team fought hard and will strive to improve throughout the season!

“Even though we lost we played really hard and gave it our best effort,” said Jade Macke.

While the eighth grade was playing on one court, the seventh grade A-team was getting ready for their first middle school volleyball game on the other court. The Thunder team came out ready to play and picked up the victory winning the first set 25-18. In the second set, the Thunder team lost their momentum, losing the set 17-25. In the last set, the Thunder team was determined to get the win and they played hard to achieve the win with a score of 15-8.

Emma Hermesch said, “We worked together and ended up winning the game.”

Overall, the Thunder volleyball teams had a great start to the season. They may not have come home with all victories, but they had a lot of fun playing volleyball!