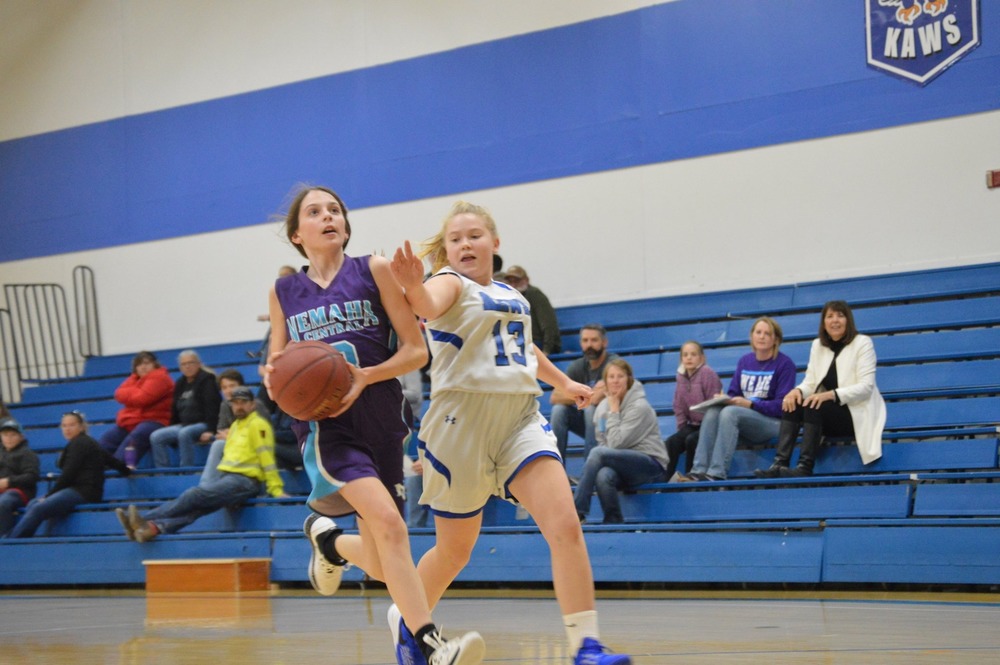 The Nemaha Central Lady Thunder basketball team headed down to Perry-Lecompton on Monday, November 18, ready to play basketball. All of the Lady Thunder teams had already played Perry once this year, and they had won all their games against them. The Thunder teams were hoping to get some wins on Perry's home court!

Up first was the seventh grade A-team. By the end of the first quarter, the Thunder had scored a whopping 10 points, leaving Perry with nothing. By halftime, the Thunder added another 6 points to their score, while Perry was still scoreless. The score of the game was now 16-0 and looking good for the Thunder.

In the next half, the Thunder had bumped their score to 26, while the Kaws were on the board scoring one point. The score of the game was 26-1 and Perry was still no threat to the Thunder. In the fourth quarter, the game ended well for the Thunder, with a phenomenal score of 34-1.

“We have been practicing hard all season, and the Perry game really showed off all that work,” said Zoey Sudbeck.

The eighth grade A-team game got off to a rough start for the Thunder. By the end of the first quarter, the score was 6-10, with the Kaws in the lead. The second quarter went a little better, and the Thunder gained 4 points. Perry had only added two points to their score, making the halftime score 10-12. Although the Kaws were still in the lead, the Thunder was catching up.

The third quarter was difficult for the Thunder, and the girls found themselves down by 6 points, 12-18. During the fourth quarter, the Thunder had caught up with Perry and was tied with them for the rest of the quarter. Within the last few seconds of the game, the Kaws hit a three-pointer to make the final score of the game 24-27. Even though Perry had outscored the Thunder, they still gave it their best effort throughout the game!

“We played well, but just came up a little short on points,” said Isabelle Evans.

The eighth grade B-team game started well, and the score was 10-0 by the end of the first quarter. The Thunder had scored 6 points in the second quarter, while Perry only scored 2 points. The halftime score of the game was 16-2, with the Thunder in the lead.

Click the link below to see more pictures from the game!