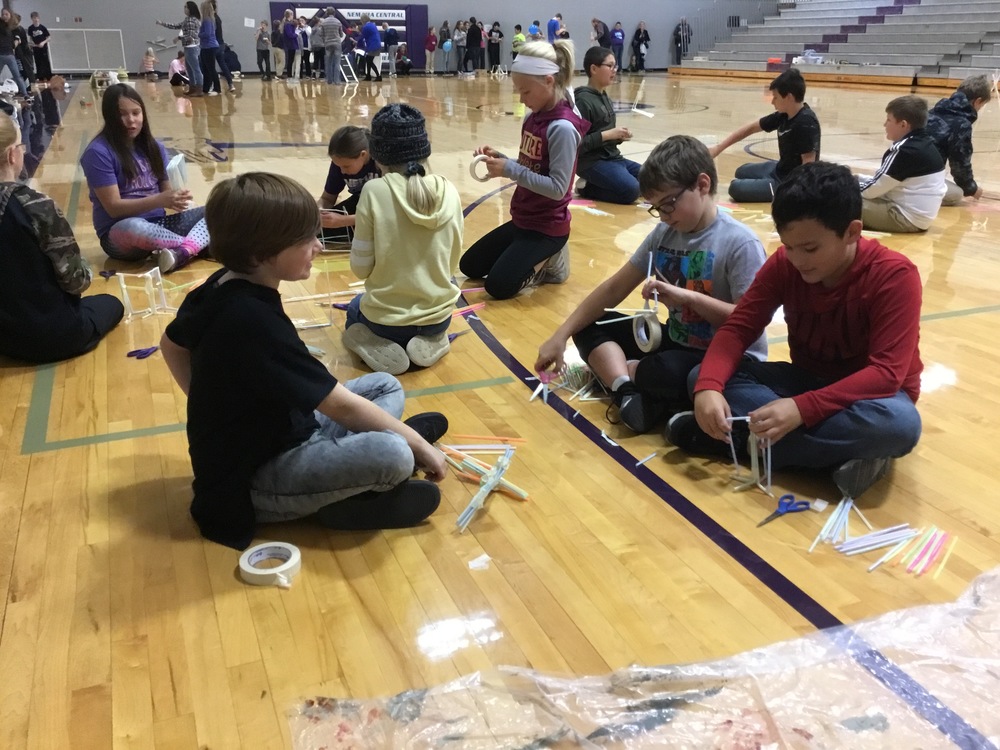 The Nemaha Central and SPPS 5th graders participated in an Engineering Extravaganza competition. The competition took place at the Nemaha Central High School secondary gym on Friday, November 5. As part of their science grade, students had to use problem solving skills and investigate science. Students had to do one on-site event and one build-at-home event. The on-site events included building a card bridge, egg tower, or a wall marble maze.  The build-at-home events to choose from were to build a pasta car, newspaper table, or balloon car. Only the top six students in each group got a medal.

One of the build-at-home categories was the newspaper table.  Students could only use masking tape and newspaper to construct a table that could hold the most weight. The first place winner in the newspaper table category was Jean Yumba, who created a table that held 105 lbs only weighing 0.1 lbs. Courtney Stallbaumer came in second place, Nia Holthaus in third, Brenden Holthaus in fourth, Ryker Dalinghaus in fifth, and Kalem Schmelzle in sixth.

Another build-at-home event was the balloon car category. For this category students had to try to make a balloon car and see how far they could get it to travel. In the balloon car category, the first place winner was Will Young with a distance of 40ft 11 ½ in.   Kyler Ganstrom came in second place, Logan Haug in third, Kaiden Sura in fourth, McKenzie Rottinghaus in fifth, and Brady Koch in sixth place.

For the last build-at-home event, students had to make a pasta car. The students could use any variety and different types of pasta, to make their pasta cars. The first place winner in the pasta car category was Colten Corby with a distance of 19 ft 7in.  Parker Bergman came in second place, Hayden Rottinghaus in third, Conner Lueger in fourth, Vincent Deters in fifth, and Mykal Novotny in sixth place.

One of the on-site builds was the card bridge. The students had to make a bridge only using card and the bridge that could hold the most pennies won. In the card bridge category, Lavin Stallbaumer came in first holding 17 pennies on his card bridge.  Ali Jo Henry came in second place and Colton Blume and Conner Lueger tied for third. There were only 4 places given in this category.

Another on-site build was the egg tower, which was made of straws and tape. The students had to build a tower that could hold an egg for fifteen seconds. The first place winner in the egg tower category was Jean Yumba with a total score of 55.9 cm.  Grace Hammes came in second place, Makenzie Howard in third, Hailey Meyer in fourth, and Emma Hermesch and Ben Bletscher tied for fifth place.

For the last on-site event students had to build a wall marble maze. The marble maze was made up of tape and cardboard tubes. The marble that took the longest time to travel down the maze won. In the wall marble maze category, Erika Bovell came in first with a time of 16.93. Haley Wood came in second place, Logan Haug in third, Alexis Tangeman in fourth, Maggie Jones in fifth, and Antonella Cano came in sixth.

Hailey Meyer said, “It was fun to see everyone’s projects.”

Mason Schultejans said,  “It was a very fun engineering experience.”

Click the link below for more pictures of the event.