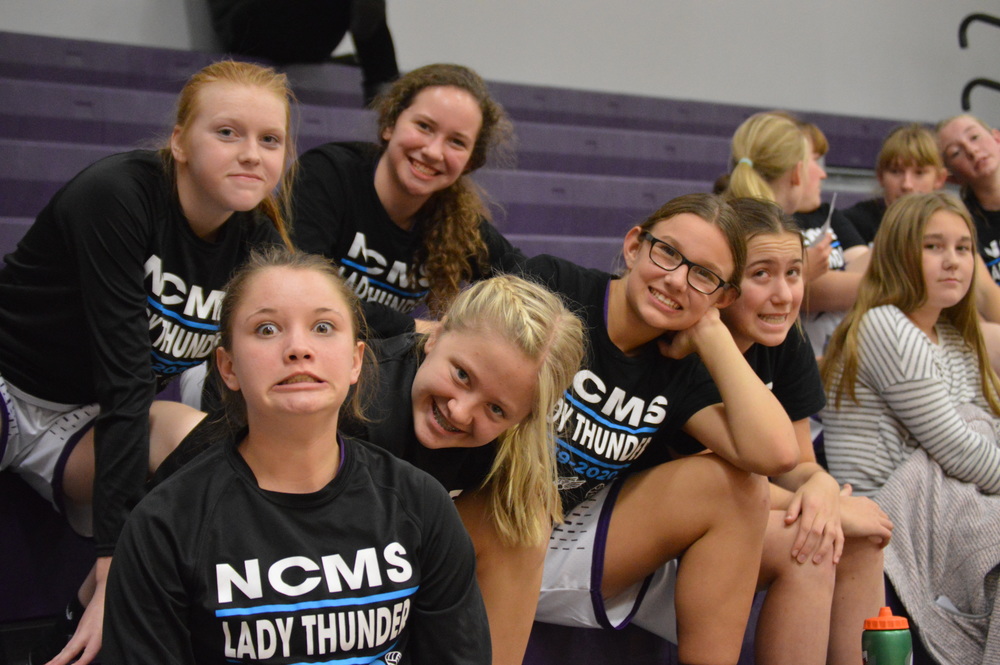 The Nemaha Central Middle School Thunder girls played their second regular season game against Hiawatha on Monday, October 28. Both teams knew it was going to be a defensive match-up. The eighth grade went into the game looking for their first win of the season, while seventh grade was looking to stay undefeated on the season. There would not be any B-team games due to the number of players that Hiawatha had participating.

Starting the second half of the game, the Thunder team came out with fire in their eyes ready to play some more ball. The Thunder girls stepped out on the floor and played some amazing defense stopping the basketball from going into their opponent’s basket. Apart from the Thunder’s defense, the offense was also outstanding. The Thunder scored eleven points in the third quarter, while Hiawatha did not score. The score at the end of the third quarter was 23-8. Going into the fourth quarter, the Thunder kept going after the ball and managed to score six more points, while Hiawatha only scored two. The final score of the game was 29-10, with Thunder on top to pull out a victory.

Hailey Nordhus said, “I’m happy we got our first win of the season, and how great we played."

Going into the first quarter of the seventh grade A-team game, the Thunder started out very slow. They had many possessions of the ball, but could not get one basket the whole entire quarter. The Thunder team only allowed Hiawatha to score three points. With a couple of free throws, the Thunder girls were able to get on the board, trailing Hiawatha 2-3. In the second quarter, the Thunder team took the lead right away by scoring eight points. The Thunder team was picking off passes left and right against Hiawatha, which is why Hiawatha ended up only scoring three points in the quarter. The halftime score was 10-6.

To begin the third quarter, the Thunder girls brought out their tough defense to stop Hiawatha from scoring any points or from gaining control of the game. The Thunder was once again rocking on offense and scored six points. The score at the end of the third quarter was 16-6. The fourth quarter started out great with Cali Honeyman scoring six of the eights points. The defense for the Thunder was still superb, and they managed to hold off the Red Hawk offense. Hiawatha was able to score only one point in the quarter. The final score of the game was 24-7 as the Thunder girls picked up another win.

Zoey Sudbeck said, “It was great to finally have a home game. It was fun watching the eighth graders play and we all tried our best and came out on top.”

The Thunder team had an amazing night winning both of their games. The eighth grade won their first game, and the seventh grade remained undefeated. Everybody had a great night and was excited about how it turned out.

Click the link below for more pictures of the Hiawatha game.   https://www.facebook.com/pg/Ne...