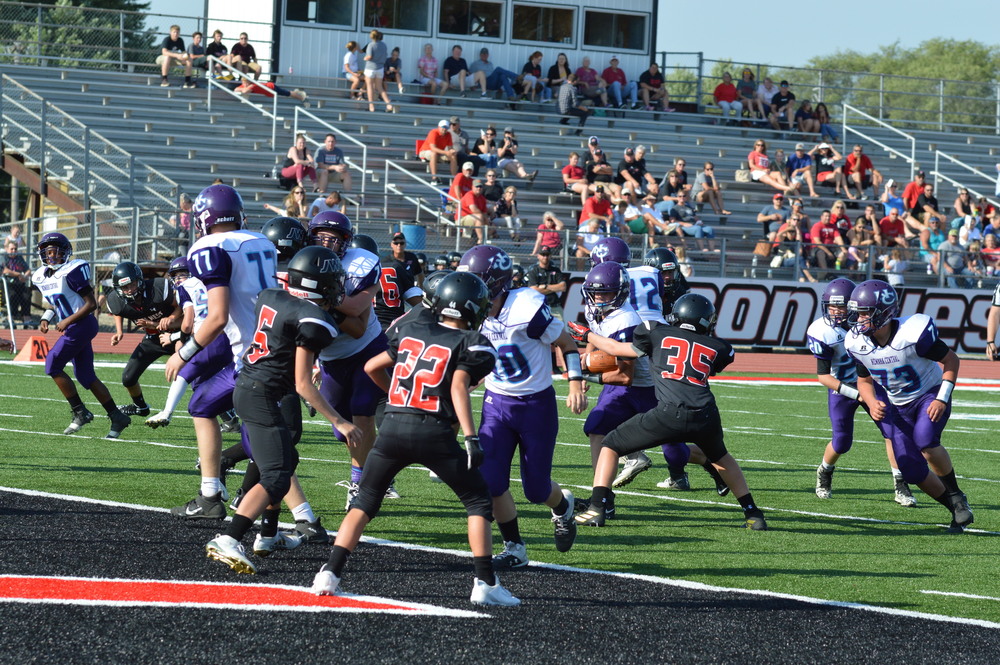 The Nemaha Central Middle School's first football game that was on Thursday, September 12, was a great start to the football season for NC. Coach Hadden Hiltgen, Coach Schuyler Mayberry, and Coach Michael Ohlsen were all there to call out plays and help with any mix up one of the players might have had. The 8th graders have 11 athletes out this year, while the 7th grade have 10 boys out this season. The managers are Dayton Nelson and Bryan Carrasco.

The first quarter started and it was slow as both teams were trying to get the kinks out. Eventually, NC jumped on the board after Jeff West snapped the ball over the punter's head and out the back of the end zone for an NC safety. Then the sirens sounded it was the end of the first quarter. The Thunder was in the lead, 2-0.

The second quarter started after the teams flip flopped the sides, but still the same distance from the goal line. NC fought hard and broke through Jeff West’s defense for a touchdown. NC made the 2 point conversion and went to kick off. After stopping Jeff West’s march down the field, it was NC’s turn. They played smart and ended up getting another touchdown with another 2 point conversion right before the quarter was over. The score was 18-0 with a Thunder lead.

The third quarter was hard on Jeff West. Everyone started to slow down a bit, but NC cranked it up and scored another touchdown. Eventually, NC had a turnover because they tried recovering a punt but failed. The final score of the quarter was 24-0 with NC still on top.

The fourth quarter came and the athletes were wearing down in the heat. Both sides still managed to push through and NC even scored another touchdown. The final score of the game was 36-0 with NC holding Jeff West scoreless.

After the regulation game, the two teams played a 5th quarter.  In the 5th quarter, each team gets the ball for 10 plays each. Jeff West started with the ball and then NC had their turn.  NC managed to find the end zone on their possession.

All in all, this year is looking to be pretty good for NC. It will be interesting to see how both teams will grow.

“We played pretty solid except for the first half,” said Collin Jost.

“I think we played well together and communicated good,” said Miles Carpenter.

Check out more football pictures at the link below: